About Our Remanufactured 4L65E Transmission 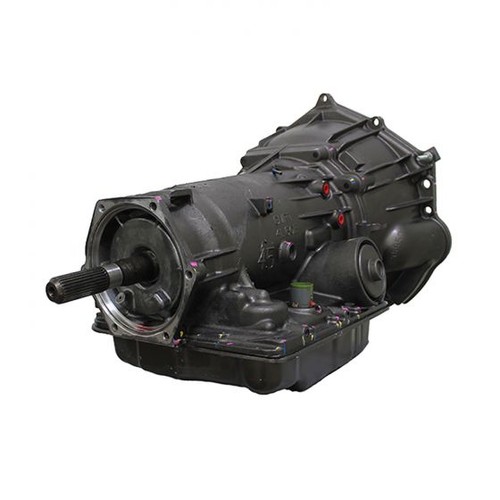 We’ve handled numerous 4L65E transmissions over the years and will be happy to assist you with any work you require! Typically considered a 4L65E 4x4 transmission due to its heavy-duty applications and 4L65E torque converter that’s more powerful than its predecessor, our team of mechanics and engineers know these transmissions like the back of their hands.

We’ll never sell you a transmission that isn’t in perfect working condition, as this is our pride and joy. Every transmission we remanufacture is completely disassembled, taken apart, and carefully put back together with re-machined or new parts that meet OEM specifications.

Our team knows the factory defects 4L65E transmissions can come with, and take the initiative in fixing and correcting each defect during the remanufacturing process. Rest assured that your transmission was rebuilt with care, and will likely run even better than the factory equivalent!

Now you can take advantage of our unlimited mileage warranty that lasts up to 5-years! Ride around, test your transmission, and we’ll repair any problems for half a decade!

Free and fast shipping is offered to commercial addresses throughout the United States, ensuring you get your transmission handled quickly and with the efficiency you deserve. We look forward to serving you and taking care of your 4L65E transmission with the utmost care and consideration.

1-2 Accumulator Pistons, upgraded to aluminum, replace the OE plastic pistons that can cause premature clutch failure.

Yes, it is possible to replace a 4L60E transmission with a 4L65E, although they are separate distinct models of transmission. The 4L65E, for example, received many internal part upgrades from GM. You can upgrade and swap with no hassle using our expertly rebuilt and remanufactured 4L65E transmissions.

How much horsepower can a stock 4L65E handle?

What vehicles have a 4L65E?

Yes, a 4L65E has an electronically controlled OD (outer diameter) designated by the “E” in the model and therefore will bolt up to a TH350. The primary difficulty is then upgrading your transmission controller and adjusting gear ratios, as required. A GM adapter kit may be required to ensure proper compatibility.

The 4L65E is an automatic transmission from General Motors (GM) with stronger internals compared to the 4L60E model. It includes 4 forward gears, 1 reverse gear, and is designed for longitudinal engines.

When looking back at the history of this transmission model series, we’re brought back to the year 1982 when the Turbo-Hydramatic 700 (TH700) was still produced. The 4L65E transmission is GM’s electronically commanded iteration on the original TH700. Regarding the production of 4L65E’s, the Toledo Transmission plant in Toledo, Ohio as well as the Romulus Transmission Plant in Romulus, Michigan is where these transmissions are typically built within the United States.

Looking at the 4L65E and 4L60E from the outside, they look exactly the same. Even though they share the same parts on their exteriors, the 4L65E has stronger internal components, including five pinion planets compared to the 4L60E’s four. The torque converters and input shafts of these models are also different, with slight differences in input shaft length and converter design.

Coupled behind the 6.0 Vortec in the year 2001, the 4L65E was released as an upgrade to the 4L60E. The resulting 4L65E transmission was rated for 380 ft-lb of torque in its stock configuration. GM went on to also produce the 4L80E and 4L85E transmissions which were used for more heavy-duty applications and had beefed up internals.

Vehicle models that utilize the 4L65E transmission include:

The heavier-duty components in the 4L65E transmission make it ideal for cars and trucks that require additional strength and performance. It should be noted that this transmission has a twin with a speed sensor located in the pump and it is called the 4L70E transmission. Other than that, the 4L65 and 4L70 transmissions are considered identical.

If you have a 4L65E transmission you’d like to swap out with a used or rebuilt transmission, or if you currently own a 4L65E that you’d like rebuilt from scratch with high-quality components, we’re equipped and ready to help!