About Our Remanufactured 4T80E Transmission 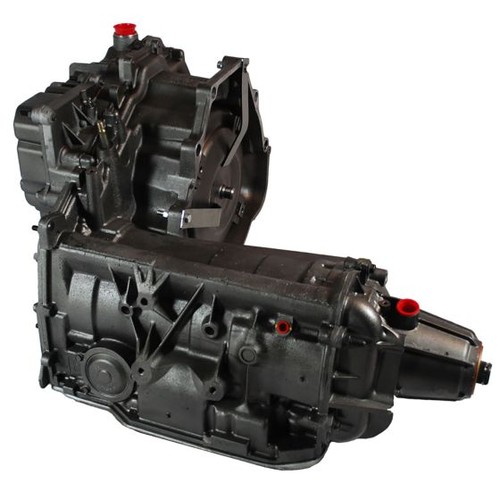 Our remanufactured 4T80 transmissions have all parts replaced with re-machined or brand new components, so your transmission will deliver strong performance for many more miles. When we recondition a GM 4T80E, we replace every part in the bell housing, including all the worn parts, to make sure that the transmission will meet or exceed OEM part specifications. If there have been common points of failure in the GM4T80E transmission, we replace these parts with upgraded components, so that they're less likely to fail. This gives you a transmission that has real potential to last longer than a factory-new OEM crate 4T80E transmission at a lower cost while delivering superior performance for a long time. This helps you prevent unexpected, expensive breakdowns on the highway. We also offer a used 4T80E transmission that has been professionally inspected to ensure it will deliver good performance for the foreseeable future.

When you buy from Reman-Transmission, you'll not only find a superior GM 4T80E for sale, but you'll also have some other outstanding benefits. We offer free shipping to any commercial address in the continental United States, with a $75 fee to deliver to residential addresses. Beyond that, we'll provide you with a 6-month, 6,000-mile warranty on a used 4T80E transmission and a 5-year, unlimited mileage warranty on a remanufactured GM 4T80E transmission. We also keep numerous other remanufactured manual and automatic transmissions on hand from all major domestic and import manufacturers. All units are tested and inspected to be certain they will meet or exceed OEM factory specs before shipping. Due to the lengths we go to in the remanufacturing process, your transmission will likely outlast one straight from the factory, with its faults remedied. Our highly-trained technicians work hard to give you a great replacement or upgrade the 4T80E performance transmission for your vehicle.

Upgraded AFL valve allows for precise shift control, taking line pressure and regulating it to a specific level for the solenoids.

Is the 4T80E a good transmission?

As a beefed-up transmission to match the name change in the Cadillac DTS, formerly the DeVille, the 4T80E transmission was focused on moving all that V8 torque to the wheels and has done so with few problems. Our transmissions treat those problems effectively, giving you a great ride!

How do I identify the 4T80-E transmission?

Identifying the GM 4T80E transmission is fairly simple. First, the OEM tag number will end in an N. Second, the case connector will actually hang off of the case. Third, the side cover is more squared than other models and may be stamped with 4T80E on it.

Designed to work with Cadillac's Northstar V8 front-wheel-drive lineup, the 4T80E can be found in the Cadillac DeVille, Seville, El Dorado, and DTS, as well as the Oldsmobile Aurora, the Pontiac Bonneville, and the Buick Lucerne, all from the General Motors Corporation.

What transmission fluid for 4T80E?

Developed as a performance transmission succeeding the Turbo-Hydromatic 125, the GM 4T80E transmission is a four-speed automatic transmission designed to work with a transverse engine configuration. As a continued development of the three-speed Turbo-Hydromatic 125, 4T60E, and 4T65E, the 4T80E added electronic controls and an automatic overdrive transaxle with a torque converter. Built at General Motor's Willow Run Transmission in Ypsilanti, Michigan, it was among the first to take on GM's new naming convention, with the first letter representing the number of forward gears and the E at the end signifying an electronic transmission control.

Designed to work with vehicles up to 8,000 pounds GVWR, it originally featured a viscous torque converter clutch. The viscous clutch was replaced by an electronically controlled converter clutch in 2004. It was designed for use with V8 engines in front-wheel drive vehicles, and specifically for the Cadillac Northstar engine. For the time period, it was designed for extreme power handling capability, providing a powerful connection between the engine and the wheels.

Depending on the engine that it was attached to, it featured final drive ratios of 3.11:1, 3.48:1, and 3.71:1. The gear ratios are at 2.960 for first gear, 1.626 for second gear, 1.000 for third gear, 0.681 for fourth gear, and 2.130 for reverse. If you own a vehicle with this transmission, you'll be happy to know that in its long history, there have been no recalls on it, and only two service bulletins issued. The main issues that have been noted tend to deal with circuitry and sensors, not unexpected in a first-generation electronic transmission. Fortunately, when you purchase a remanufactured 4T80E performance transmission from us, you know that these problem parts have been upgraded to prevent the problem in the future, giving you a transmission that is even more rock-solid than left the factory.

For many years, the transmission was the exclusive domain of the Cadillac division of General Motors, until the 1995 Oldsmobile Aurora debuted. It was later used in the Pontiac Bonneville and Buick Lucerne, in addition to its long usage in the Eldorado, Seville, DeVille, and DTS in the Cadillac lineup. It was succeeded by the 6T70, which was a six-speed automatic transmission that helped boost fuel economy by reducing the range of each gear.