About Our Remanufactured RE5R05A Transmission 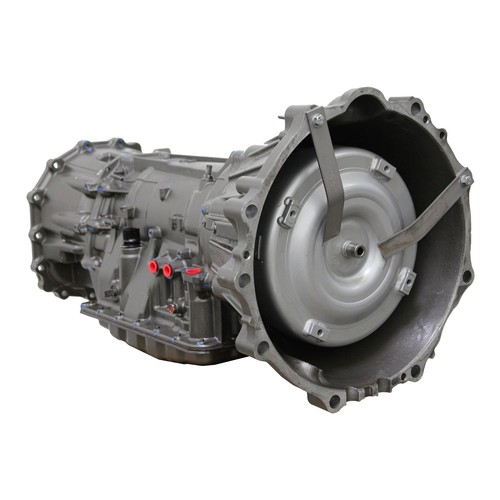 For our clients, we want to make shipping simple. To do that, we offer completely free shipping to all commercial addresses (this includes shipping transmissions to your shop). We also ship to residential addresses, and we only charge $75 as a flat-rate fee for doing so.

Completely remanufactured valve body with new pressure switches and, when needed, speed sensors. All valve bodies are tested independently to verify proper operation prior to the dynamometer testing of the completed transmission.

All bushings and machined surfaces are polished to a mirror-like OE finish of 15 RA or better.

Is the RE5R05A a good transmission?

The RE5R05A is known as a “milestone” transmission because it was the first line of performance transmission products with high stall torque converters for the Jatco automatic gearboxes. The transmission is known to be good and reliable overall. Our remanufactured replacements make the best replacements because they are updated with the latest parts and designed to eliminate defects.

What vehicles have a RE5R05A transmission?

There are multiple vehicles makes and models using the RE5R05A transmission, including the Nissan Titan, Nissan 350Z, and Nissan Infiniti G35. The Jatco version may be found in the Nissan Frontier, Pathfinder, Xterra, Armada, and Infinity G35, M35, Q45, M45, QX56, FX45, FX35, and CX35.

Who makes the RE5R05A transmission?

The RE5R05A was originally manufactured by Jatco, which had partnered with Nissan. It is also manufactured for Subaru and Jatco. Our RE5R05A is just as good as or better than these original models because they are inspected for defects. All defects are corrected, and new or re-machined parts meeting OEM specs are installed.

How much does a RE5R05A transmission weigh?

The Nissan RE5R05A transmission is rated by torque limits for 100,000 shift cycles. The Jatco RE5 is rated at 333lb/ft but is known to handle up to 400 horsepower. There is a potential to exceed this in some cases depending on the parts used.

The RE5RO5A transmission is a transmission made by Nissan and Jatco, the Japan Automatic Transmission Company. It has one successor, the 7R01, and its predecessor is the 5R01. You can find this transmission under the alternative names 5R05, JR507E (for Nissan), JR509E (Nissan), and 5EAT (Subaru part number). Depending on the vehicle you’re working on, you will need to select the correct part number to find the transmission, though they are technically the same.

Since 2003, the RE5R05A has been available on the North American market. The Jatco 5-speed automatic transmission 5R05, or Nissan model RE5R05A transmission, was released in 2002 and continued on in production through 2019. It's OEM ATF is the Original NISSAN ATF Matic J. The United States had the Matic S, which superseded the Matic J in 2009.

You will recognize this transmission class for its 5-speed longitudinal automatic design.

The transmission fluid used for the RE5R05A has to conform to ATF-HP specifications to work properly. It may be found today as relabeled Idemitsu fluid, and Valvoline has an “Import Multi-Vehicle” fluid that will also work for this model. Pennzoil ATF-J and Castrol Transmax J both are approved for use in the RE5R05A.

The RE5R05A transmission is known to be a good, reliable automatic transmission. It does have a history of several large failures, but those are largely to do with other issues with the vehicles, such as seal failures of the trans coolers and cross-contamination. As for actual transmission issues, there is a potential for the pin tracks to crack or break. Sometimes, sensor failures also occur, but these are about the only issues that come up for the transmission in general.

The RE5R05A transmission is used in several Nissan and Infiniti vehicles including the R51 Pathfinders, Armadas, 2005+ Frontiers, Xterras, Titans, and G35s.

Other part numbers this part is known by: